WAVY GRAVY
CLOWN PRINCE AND MASTER OF CEREMONIES AT WOODSTOCK

“Sometimes Brilliant is simply remarkable. Filled with inspiration and humor, Larry Brilliant’s memoir chronicles his spiritual and professional journey that includes fighting for social justice in America and helping to eradicate smallpox in India. Sometimes Brilliant is a candid assessment of a tumultuous time and an insider’s account of what can be achieved through the sheer force of a shared vision.”

SHERYL SANDBERG
COO OF FACEBOOK AND BESTSELLING AUTHOR OF LEAN IN

“Larry Brilliant has been an incredible inspiration to me, as a spiritual advisor, teacher and friend. He has dedicated his life to helping others and making the world a better place-from eradicating smallpox to addressing global inequality. Larry also helped ignite my personal passion for advancing children’s healthcare and for that, I’m grateful. His life story is nothing short of remarkable and this book will serve as an enduring inspiration for many generations to come.”

“Great things happen when the best minds of a generation put their differences aside and join forces to make the world a better place. Sometimes Brilliant is more than just a piece of medical history. Larry Brilliant tells an inspiring and compelling story of a truly global effort that crossed boundaries, defied political ideologies and serves to this day as a case study on the amazing power of collaboration.”

“Larry Brilliant has touched many lives in person all over the world. The famous, the not so famous, the establishment and the counter-culture all figure in this remarkable memoir. Sometimes Brilliant will touch still more lives with its humanity. An extraordinary life extraordinarily well-lived.”

“A brilliant story teller reveals a life of endless curiosity. Having worked with and known the author for 43 years I can verify that some of these stories may actually be true! I highly recommend this book.”

BILL FOEGE
M.D. MPH, RECIPIENT OF THE PRESIDENTIAL MEDAL OF HONOR, FORMER HEAD OF CDC, AND AUTHOR OF HOUSE ON FIRE 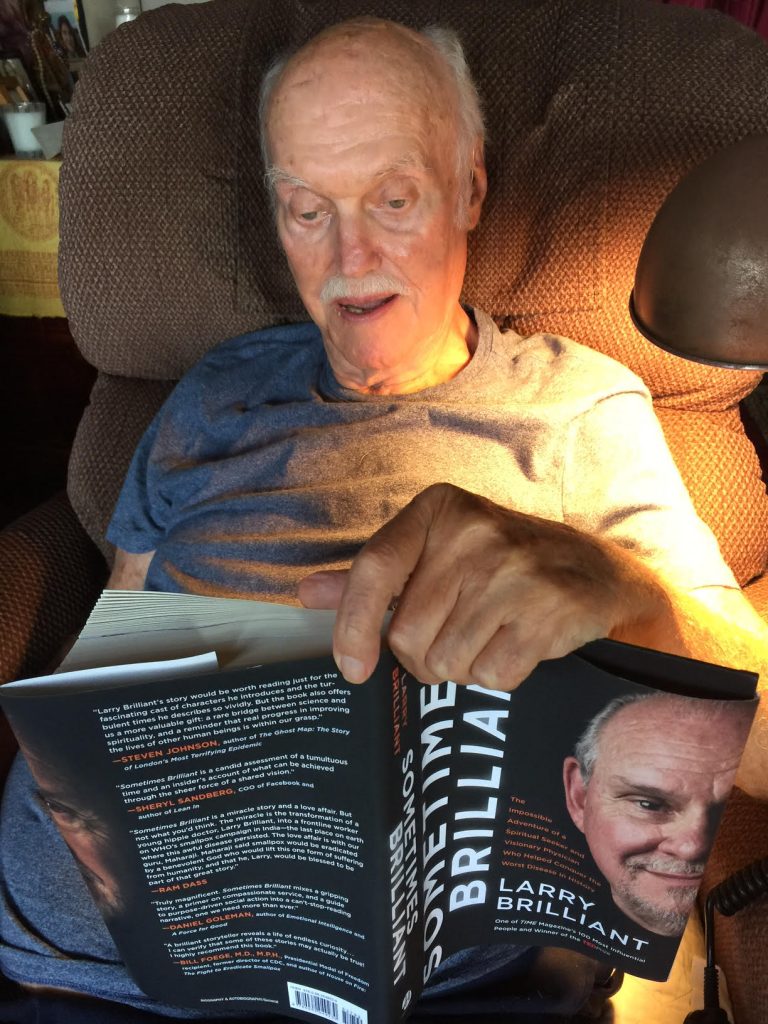 “Sometimes Brilliant is a miracle story and a love affair. But not what you’d think. The miracle is the transformation of a young hippie doctor, Larry Brilliant, into a frontline worker on WHO’s smallpox campaign in India – the last place on earth where this awful disease persisted. The love affair is with our guru, Maharaj-ji. Maharaj-ji said smallpox would be eradicated by a benevolent God who would lift this one form of suffering from humanity, and that he, Larry, would be blessed to be part of that great story. With that blessing Larry Brilliant, M.D. was transformed into Doctor America. Along the way Larry’s heart opened, and he learned a lot about suffering and love in what became a lifelong path of service.”

“Sometimes Brilliant is a must read for anyone who believes that hard work and good intentions can overcome even the most immense and evil test. At the instruction of his guru in India, Larry Brilliant took up the charge of eliminating smallpox in the 1970s – the worst disease in the history of mankind. Never have so many owed so much to so few, Winston Churchill once famously said, but even he could not have imagined the scale of what Larry and his small team of inoculators accomplished in India. Billions of lives have since been saved. In fact, Larry’s story may well be the reason why you are alive and holding this book.”

“What do you get when you cross Steve Jobs’ India with Wavy Gravy and the Grateful Dead, Google with the PayPal Founders? What a welcome relief to see this story of someone with soul and a great healing spirit coming out of Silicon Valley, to actually – literally – help in saving the world. This is the wonderful book we will all give to our children, as they look for mentors and career inspiration – after staying up reading it ourselves.”

“Sometimes Brilliant is an epic, life transforming story, about the triumph of Love against all odds. Larry’s mystic, long & winding hippie trail emerges from the era of sex, drugs & rock & roll & leads toward saving the world’s poor from deadly diseases. Our globe urgently needs Doctor America’s vision. Brilliant is an eye opening tale of a true super hero, friend of humanity & servant of God. In Brilliant, readers will see an America which is hopeful, fearless & champion of the underdog. Sometimes Brilliant should be required reading for students at all Universities across the globe & for world leaders who want to find creative solutions to overcome the myriad threats of the 21st century.”

“In an age of global crisis, Sometimes Brilliant is a beacon of hope. An improbable and engaging account of how the world came together to eradicate one of the most deadly diseases in our history. A must read for those dedicated to create necessary and lasting change.”

“Dr. Larry is more than sometimes brilliant. He has written an epic tale about the massive program to eradicate smallpox from the face of the globe, as predicted by our guru, Neem Karoli Baba. He combines the deep tenets of living a spiritual life with an activist’s heart-full desire to relieve suffering-the perfect illustration of what is meant by fulfilling your life purpose through karma yoga. And his brilliant light shines on.”

PARVATI MARKUS
AUTHOR OF LOVE EVERYONE: THE TRANSCENDENT WISDOM OF NEEM KAROLI BABA TOLD THROUGH THE STORIES OF THE WESTERNERS WHOSE LIVES HE TRANSFORMED

“This is the story of life that you couldn’t make up if you tried. Inspiring, terrifying, touching and transcendent, with a cast of characters from the widest possible spectrum of humanity. Dr. Brilliant takes us on the last leg of a relay race against a horrible death that mankind has waited 10,000 years to complete – while also engaging us on his inner journey of discovery, despair and ultimately triumph. You can hear the knock on the door of a billion house calls in his prose, his love and a lifelong journey that celebrates the human experience. An astounding book to treasure and devour. Dr. Brilliant is a superstar and I am honored to be a small part of the effort to let everyone else in on the secret.”

“What can I say? It’s wonderful. It’s Larry on the page. Yum!! It brought so much back, and shines with Maharaji’s advice to us: love and service. You are amazing­—I am so glad you did this. It is such a gift. At your feet, Mirabai.”

“On its surface, Sometimes Brilliant is a gripping, illuminating and entertaining inside look at one of the greatest medical triumphs of our time – wiping smallpox from the face of the planet. But at a deeper level, it is a compelling argument for pursuing a life that productively combines both serendipity and intentionality, rather than one to the exclusion of the other.”

“Smallpox raged across India, sickening tens of thousands. Enter a “young, bearded, Hindi-speaking hippie doctor,” as the WHO officer labelled the 29-year-old American. No one but Larry Brilliant could honestly tell his tale of smallpox eradication, dropping names like Ken Kesey, Wavy Gravy, Arthur Miller, Baba Ram Dass, Timothy Leary, the Dalai Lama and the Hog Farm alongside some of the greatest heroes in the history of public health. Yes, Children, this is how the disease that in the 20th Century killed more people than all the era’s wars, combined, was eradicated.”

LAURIE GARRETT
COUNCIL ON FOREIGN AFFAIRS, AND AUTHOR OF THE COMING PLAGUE